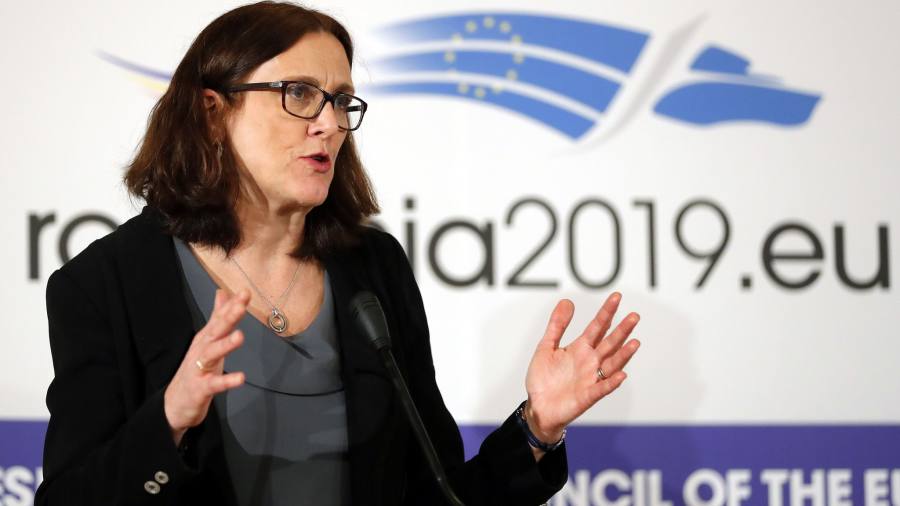 A top EU official has voiced frustration over China’s trade policies ahead of a summit this week as Brussels struggles to get Beijing to deliver on commitments to open up its market to European investments.

In an interview with the Financial Times ahead of a meeting between EU and Chinese leaders on Tuesday, EU trade commissioner Cecilia Malmstrom said the bloc would not follow the US route of using punitive tariffs to try to force China to the negotiating table. European steelmakers are among those to have been hit by additional duties imposed by US president Donald Trump since he took office, and Brussels has attacked the measures as a breach of World Trade Organization rules.

But Ms Malmstrom stressed that Europe shared US exasperation about China’s model of “massively” subsidised state-owned enterprises that expand abroad through acquisitions.

A five-year long effort to negotiate an EU-China investment treaty is “not moving as fast as it should”, Ms Malmstrom said. “It’s been going for a long time now and we’d hoped that China would be a little more open to do this. We have exchanged offers, that is a step forward, but they are very modest.”

Brussels sees the treaty as the most direct way to address complaints from European businesses who say they are denied the investment and takeover opportunities enjoyed by Chinese companies in Europe.

If China doesn’t change its positions, there will not be enough common ground to agree on a declaration

Pushed by Germany and France, the EU last month hardened its stance towards Beijing, calling China a “systemic rival”. Brussels is planning to introduce legal tools to fight takeovers by state-backed groups and to tighten access to the EU’s public procurement market. French leader Emmanuel Macron called it the end of “European naïvéte.”

The EU’s frustrations have been heightened by Beijing’s resistance o including commitments to open markets in the communiqué that is supposed to be adopted at Tuesday’s EU-China summit in Brussels.

A senior EU diplomat warned that negotiations between European and Chinese officials had made little headway because Beijing was stalling “on a range of important issues” including reciprocal market access and WTO reform.

“This doesn’t bode well and constitutes already now a serious burden for the summit,” the diplomat said. “If China doesn’t change its negotiation positions substantially and engage in a meaningful way, there will not be enough common ground to agree on joint declaration.”

Ms Malmstrom said she hoped that trade talks under way between the US and China would lead to “systemic concessions” from Beijing that would also benefit China’s other trading partners such as the EU.

US ambitions in the negotiations include ending forced technology transfer from its businesses active in China — also an EU priority.

While Brussels has welcomed the trade talks between the US and China, it is wary of some of the details of the deal under negotiation. Washington’s attempts to get Beijing to commit to buying more American products and take other steps to reduce its trade surplus are examples of “managed trade” policies that the EU argues violate the spirit of the WTO system.

“If there is a return to managed trade, this is certainly not what we should be looking at in 2019 and this worries us,” Ms Malmstrom said. She added that “quotas, decided beforehand” were “not really belonging to the market economy, and we should not encourage that.”

Brussels’ primary fear is of the WTO system coming under ever increasing strain as a result of Chinese policies and unilateral US retaliation. Beijing should show “leadership” at the WTO and join efforts led by the EU, US and Japan to rewrite its rule book in a way that addresses the gaping loopholes that have been exposed by China’s economic model, including on industrial subsidies, Ms Malmstrom said.

“We are talking to the Chinese in a very open and direct way — saying that you have gained a lot from WTO membership, you promised a lot of things . . . you said you were going to become a market economy, well then, behave like one”, she said.