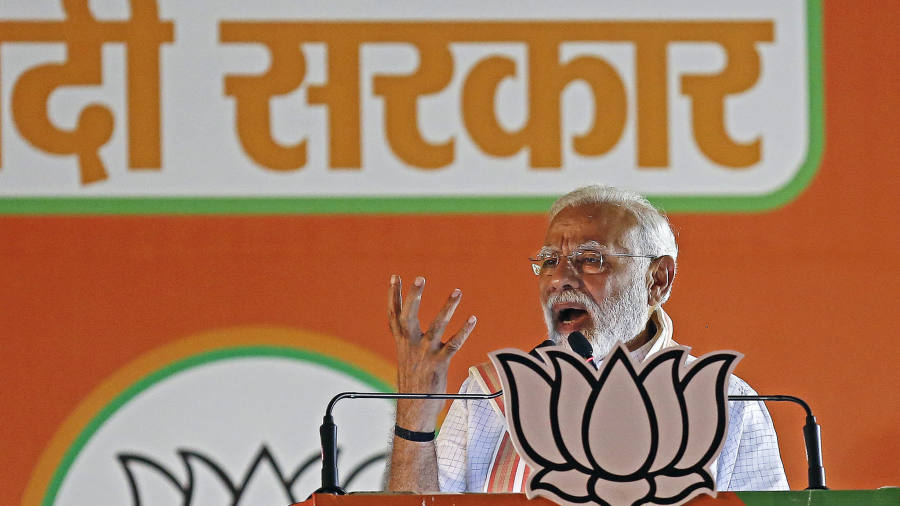 Indian prime minister Narendra Modi is poised to return to power and his Hindu nationalist Bharatiya Janata Party likely to emerge as the largest party in parliament, according to exit polls following the end of a bruising general election.

The exit polls were released on Sunday night after voting in the seventh and final phase of a protracted election that began on April 11. Around 900m people were eligible to cast ballots during the mammoth process.

The presidential-style contest was framed as a referendum on Mr Modi’s leadership, as he sought another five-year mandate to continue his efforts to build a “New India”.

Exit polls indicated the BJP — riding on Mr Modi’s image as hard-working, incorruptible and well-intentioned — and its allies, would secure a majority of parliamentary seats, trouncing rivals including the opposition Congress, led by Rahul Gandhi.

But the polls were divided on whether the BJP would secure a parliamentary majority on its own, as it did in a dramatic sweep in 2014, or would have to rely on allies to form an administration.

Indian exit polls have a mixed record, in both numerical accuracy and detecting major electoral trends. In 2014, pollsters correctly predicted a victory for Mr Modi’s BJP but few forecast its full magnitude. But in 2004, no pollsters predicted that Congress would claw back to power after a stunning upset victory.

However, India’s informal betting market, another closely watched indicator of popular sentiment, forecast on Friday the BJP and its allies would win a majority.

If the forecasts are confirmed when the votes are counted on Thursday, it will be an extraordinary personal victory for Mr Modi, highlighting the formidable political skills that allow him to remain popular despite his patchy economic record.

Addressing journalists after campaigning ended on Friday, Mr Modi, expecting victory, vowed to take charge “as soon as possible” and immediately “take decisions one after another”.

“A government with full majority is coming back after remaining in power for five years,” the premier said. “This is probably happening after a very long time.”

Mr Gandhi had been cautious on Friday, saying he would “not disrespect the people of this country by judging what they are going to do”. But in a tweet after the polls closed, Mr Gandhi lashed out at the independent election commission which has been repeatedly criticised for turning a blind eye to government violations of electoral protocol.

“The Election Commissions capitulation before Mr Modi & his gang is obvious to all Indians,” the opposition leader tweeted. “The EC used to be feared and respected. Not any more.”

The prime minister, seeking re-election against the backdrop of acute agrarian distress and widespread youth joblessness, shied away during the campaign from scrutiny of his economic record.

Instead, Mr Modi, who addressed 142 rallies and logged 150,000 kms of air travel, focused primarily on national security issues, playing to his strongman image.

In his final rally in Madhya Pradesh, Mr Modi told voters they should support the BJP, which uses the Lotus as its party symbol, if they wanted to vanquish India’s enemies. “When you vote for the Lotus you are not pushing a button on a [voting] machine, but pressing a trigger to shoot terrorists in the chest,” he told supporters.

The campaign was highly acrimonious, marked by politicians hurling personal insults at rivals. Nor were the dead spared, with the prime minister attacking Mr Gandhi’s father — the late former Prime Minister Rajiv Gandhi — as “Corrupt No. 1”.

The costly battle was financed by a tide of anonymous cash contributions, some of which came through the BJP-government’s controversial new electoral bond scheme, which in effect legalised large-scale anonymous corporate political donations.

According to official data, $714m was contributed to parties through the scheme, with the BJP the largest recipient of the funds. But this money was likely to have been just a fraction of the money spent, with many donations still coming from under-the-table cash.