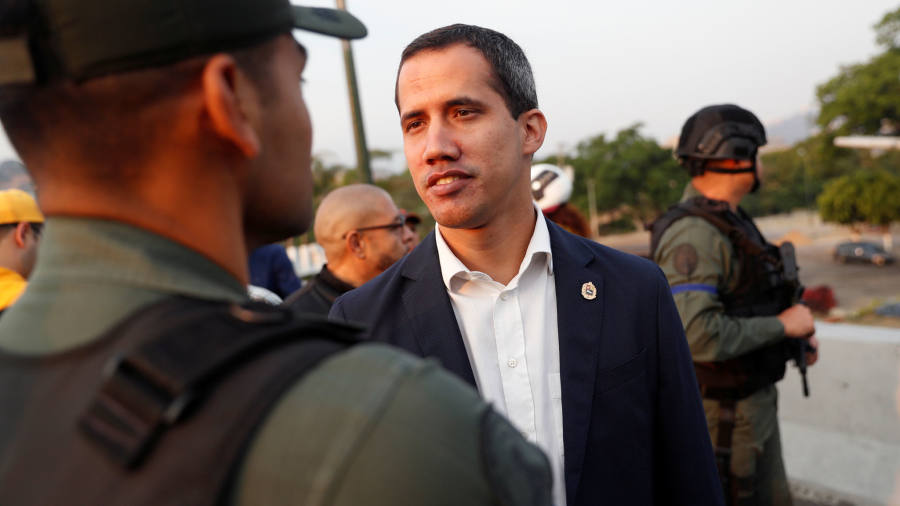 Juan Guaidó, Venezuela’s opposition leader, called for an uprising against the government of Nicolás Maduro on Tuesday and indicated he had military support.

In a video released on Twitter, Mr Guaidó, flanked by military personnel and Leopoldo López, the opposition leader who has been under house arrest, called on Venezuelans to take to the streets and urged other military units to back him.

“At this moment I am meeting with the main military units of our armed forces,” Mr Guaidó said on Twitter.

“The National Armed Forces have taken the right decision, have the support of the people of Venezuela, with the endorsement of our constitution, with the guarantee of being on the right side of history,” he added.

Responding to Mr Guaidó’s call to arms, Jorge Rodríguez, information minister in the Maduro government, dismissed what he described as “a small group of traitor military personnel” who were promoting a coup against the government.

In the first international reaction to Mr Guaidó’s attempt oust President Maduro, Spain urged both sides to avoid bloodshed and said it did not support the coup attempt. “Faced with these events we have to reiterate what we have always said about the situation in this country. We wish with all our might that there is no bloodshed,” Isabel Celaa, a government spokeswoman, said

One Reuters journalist reported that security services had fired tear gas at Mr Guaidó and about 70 military personnel who were with him near La Carlota air force base in Caracas.

Defence minister Vladimir Padrino rejected suggestions Mr Guaidó had the military behind him. He said the armed forces remained “firmly in defence of the national constitution and legitimate authorities” and that said all units across the country “report normality” in their barracks and bases.

“We reject this coup movement, which aims to fill the country with violence,” Mr Padrino said.