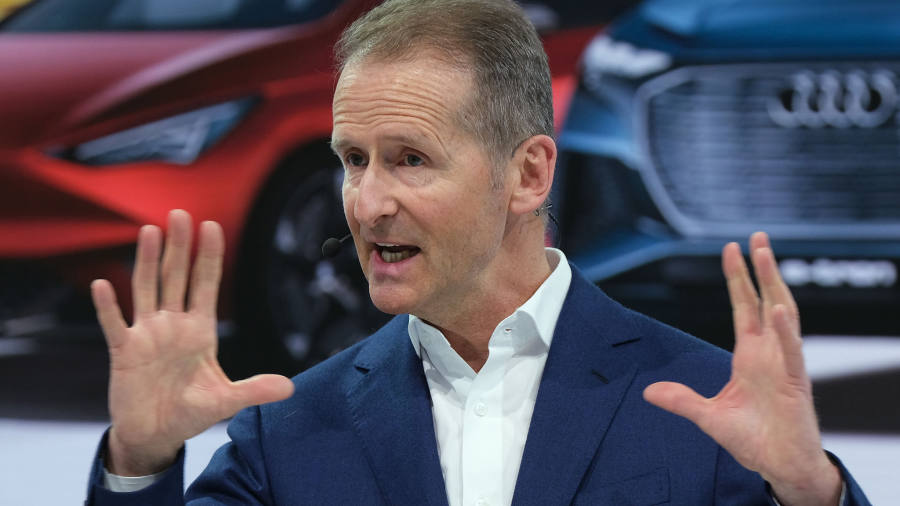 The chief executive of Volkswagen has been forced to apologise for evoking a Nazi slogan while presenting the company’s financial results, an acute embarrassment for the carmaker established in the 1930s at the behest of Adolf Hitler.

Herbert Diess said on Tuesday that the company’s profitability would give the business greater freedom in the future.

But his choice of words — “Ebit macht frei” — had an unfortunate resemblance to “Arbeit Macht Frei”, the slogan meaning “work sets you free” that was emblazoned over the gates of Auschwitz concentration camp in Poland.

Ebit is a shorthand financial term for “earnings before interest and tax”.

Mr Diess apologised on Thursday for “an unfortunate choice of words”.

“If I have unintentionally caused offence, I am extremely sorry. I would like to apologise unreservedly,” he said.

He added: “Within the Volkswagen Group, there are brands with different operating margins. Experience at Volkswagen shows that brands with higher margins normally have greater freedom of choice within the group. My statement referred to this fact.

“At no time was it my intention for this statement to be placed in an incorrect context. At the time, I simply did not think of this possibility.”

The unfortunate incident comes less than a year after VW was embroiled in another scandal after it was revealed the carmaker had been involved in an experiment to lock monkeys in gas chambers to prove that its vehicles were clean.

A project part-funded by VW in 2014 saw the animals in airtight chambers subjected to fumes from a VW diesel car and a Ford pick-up truck to show the differences in emissions of harmful nitrogen oxide gases, which have been linked to respiratory conditions.

VW’s involvement in the project was revealed in a Netflix documentary last January.

Since the diesel scandal in 2015, where it was revealed VW fitted 11m cars with cheating software to mask their emissions levels, the company has ramped up its investments into electric vehicle technology.

This week the group set more ambitious targets, with plans for 70 new battery-driven cars by 2028, that will see 40 per cent of the vehicles it sells a year being fully electric by 2040.

The company also aims to become completely carbon-neutral by 2050, including switching its factories to clean power and cutting down on executive use of private jets, in what Mr Diess said was “the first credible climate plan by a major automaker”.

In his conciliatory statement, Mr Diess added: “For more than three decades, Volkswagen has been involved in many activities which demonstrate that the company, I personally and our employees are aware of the special responsibility of Volkswagen in connection with the ‘Third Reich’.”

Volkswagen was founded in 1937 as part of Adolf Hitler’s ambitions to create a company that would manufacture cars that ordinary German families could afford, leading to the creation of the Volkswagen Beetle.

Its headquarters in Wolfsburg, Germany, used labourers from nearby concentration camps to manufacture vehicles.